There were obviously more cards from Jeff, but those were the ones I kept.

There were obviously cards going the other way, too – from me to Jeff.  Two at a time. Always, one funny and one serious.

When it came time to move out of our home, I pared down. I waded through our shared stacks. I discarded most of the me-to-him. My thought process was that he would never be reading them again, so there was no point in keeping them. However, I found two of them in the card box, amongst the him-to-me.

For our first anniversary, I handmade the serious one. It was just one simple sheet of plain red cardstock, plainly folded in half. The only embellishment added was a left-over gold foil, double-heart seal we’d used on our wedding invitations.

I wanted the message to stand on its own. The outside read, “I meant it when I said….” On the inside, I’d re-printed the vocal vows I made to Jeff on our wedding day.

I do not know which anniversary the second card was for. We only celebrated four of those, so it was either the second or the third or the fourth. Store-bought, it reminds me of the snowman card; same subject. Another way to answer to Jeff’s rote retort, “I don’t know why.”

The last two cards I saved from Jeff were life lessons for me. The subjects aren’t all that happy.

The first one came from an incident where I was once again harping about his health and bad habits and chewing tobacco. Jeff stood on one side of the bed; I was on the other side. “You must not love me very much,” I’d snarked.  “I’m trying,” he mumbled back. I shouted, “Stop TRYING and just do it!”

” I’M … TRYING…” he snapped back at ramped up volume. Stomping his feet and throwing his arms wide for exclamation, his eyes filled with frustration and failure.

That look broke my heart. He wasn’t a failure. He was just unfairly up against some highly stacked odds.  I knew no matter how much I nagged, Jeff quiting the killing tobacco wasn’t going to make him ‘get better.’

I just couldn’t understand why he’d choose to exacerbate and accelerate with vile chew. Hindsight, I know now it wouldn’t have mattered. We’d have argued a lot less if I’d realized that, then.

As unusual as it was for Jeff to have the last word in an argument, that was the end of that. He’d emphatically expressed he was trying, so I backed-off and let it drop.

Three days later, he handed me a card. 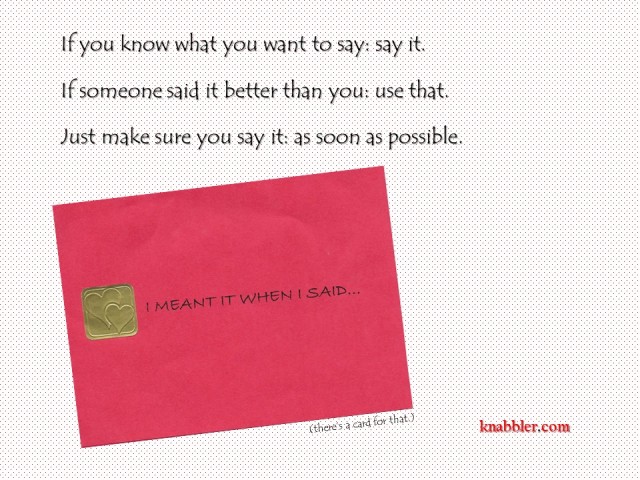 That time when someone said it better; perfectly. 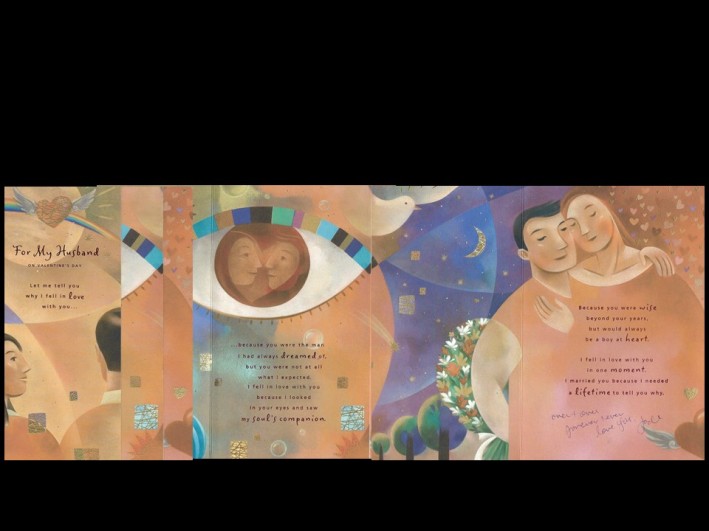