Years later. One evening after dinner, an intense pain hit Jeff in the gut. It doubled him over, caused a serious sweat but then almost instantly disappeared. He announced he must be extra gassy. I worried about it a little, but he said he felt fine.

About a week later, he excused himself from the den and said, “I’ll be right back.” I watched him walk away and thought he was walking oddly, but so many of his medications caused digestive issues, I shrugged it off as he’d probably just been in a hurry.

The TV show we were watching ended, and I went to brush my teeth. I flipped the light switch in our bedroom, and screamed. All I could see was Jeff’s feet and the top of his back. He was on the floor on his hands and knees, shaking, and sweat was pouring off him.

When I came around the bed, Jeff grunted, “thought it would pass…” Confused, I barked, “How come I didn’t know you had kidney stones!” He put a hand on the bed and tried to push himself into a standing position. That ended  badly, sliding him back to the floor, bent in half. “I don’t…” he wheezed. “Stomach pain.”

“Same as before?” I asked. “Yeah” he gasped, “Water…” I jumped around him and came back with a bathroom Dixie cup. Jeff gulped it, and asked for more. He seemed to be getting his breathing under control, but then reported,  “…getting worse.” “I’m going to call the ambulance,” I told him.

“No! No!” he protested. “I’ll be ok, just give me a minute. It always go away…” By then I had figured out, he’d had more than just the two attacks I knew about. “How many have you had?” I angrily shouted. “Just a few…” he answered.  “How about giving me a number?” I demanded.

“‘Bout once a day,” he huffed, resulting in my swearing, a lot. Usually, my creative cursing made Jeff laugh. Not this time, though. I asked if he’d called the doctor, and of course, he said he hadn’t. “Eating lots of Tums” seemed to help, so his plan was to mention at his next appointment. “Tums?” I still questioned. “How many Tums does it take.” “A handful'” was Jeff’s answer. My blood pressure was on it’s way up, when Jeff cried out in pain.

“No, you’re not!” I cried in frustration. “Yes, I am!” he insisted. “I’ll call the doctor tomorrow if it doesn’t get better.”

“Listen, Jeff.” I put my hand on his shoulder, squatted down to look him in the eye and issued an ultimatum. “Unless you can get up off this floor in the next 30 seconds, I’m calling.”

He looked at me, looked at the bed, looked down at the floor. He took a rattled breath, hung his head even lower in painful defeat and grunted, “…call…” 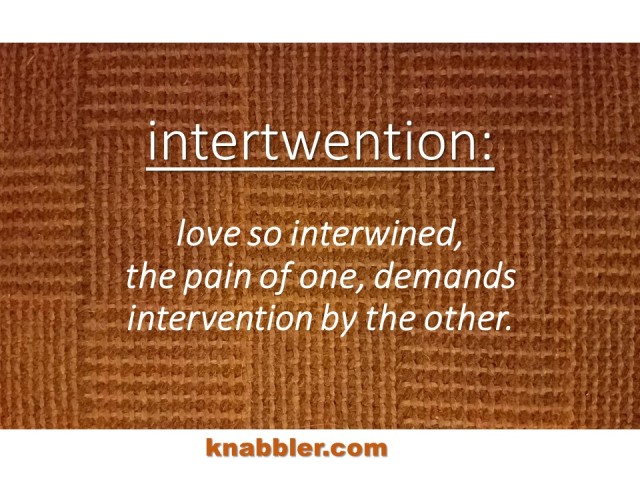 Jeff’s health took many turns, endured many twists. One after another, incidents began piling up.

Jeff had been fighting Intertrigo with a topical medication, but failed to mention it was getting worse instead of better. Right before leaving for a dinner at one of his cousins’ home, he announced he thought he should go to the emergency room. “Can’t you wait until after dinner?” I asked. “We’ll be closer to the hospital and we can go right after.”

“No,” he replied. “I need to go now.” Knowing Jeff would normally never miss an opportunity for dinner and a social visit, I panicked a little, and asked for specifics. I was annoyed, because I really wanted to go to this dinner. I was angry because, if it wasn’t working after a week of treatment, he should have done something about it. “Like what?” he wanted to know. “Like call the doctor!” I threw up my hands.

“Well, this is what the doctor gave me. Doctors know what they’re doing! They go to school for it…” he argued. What followed, as we gathered our belongings to head out, was an argument like many more to come.

My stance is that the patient needs to be responsible for telling the doctor if something isn’t working. Doctors and diagnoses aren’t always correct, and the right doctor won’t be annoyed with you for asking. Jeff was lucky to have a doctor like that. Actually, I was the one who was lucky he had a doctor like that, since I was the one informing her of subsequent non-successes and eventually, other treatments I’d like to see taken.

So, we made the call: explaining our regrets, explaining we were on the way to the emergency room. I felt even worse when I learned that dinner had already been made and a special cake had already been baked. Before we’d even pulled out of the driveway, Jeff’s phone rang. He shook his head, as he told his brother it was true; we were headed to the ER. The Korte Grapevine is the fastest form of communication I’ve ever come across. So many times, I’ve been so very thankful for that.

Along with Intertrigo, a rampant yeast infection had developed. With a blood sugar of almost 700 – the attending doctor checked Jeff’s incoming chart and incredulously demanded, “How are you even still talking to me?” That range is commonly coma and or death inducing. By this time, though, Jeff’s normals were regularly 350-400. That’d be like a controlled or non-diabetic hitting a 400. Not good.

A spinal tap and a few other tests, lead to an admission. Through it all, Jeff never stopped talking… or joking.

Quote for the week:

We went to church. Then, we kept going to church. For the most part, I enjoyed it. I found similarities in prayers and biblical stories. When I skipped over the Jesus part, the sermon always had some good message. Once a month, I remembered I was an interloping fish out water. Communion stressed me out.

Staying seated in a small-ish church was an obvious choice. Despite the invisible but unmistakable arrow of non-belief over my head, greetings were sincerely cordial. “Just wait ‘til they find out,” I’d think to myself, running an uneducated scenario in my head. It was easy to envision stone-faced, blank-wall welcome-retraction.

I noticed while most members sported Sunday clothes, a few regularly did not. It seemed Jeff and I were over-dressed, based on the attire of other attendees in our age range. So, I asked him about the dress code. “I know,” Jeff said. “I just can’t wear jeans to church. It doesn’t seem right. I’d be uncomfortable. I think it’s kinda disrespectful.” Then, as usual, he gave me a choice in the matter by adding, “… but, you can, if you want to.”

I thought about and reached the same conclusion. I would never have worn jeans to a Friday night service. Without ever having done it, or been given the opportunity to, I instinctively felt I’d be uncomfortable, anyway. Dressing up with Jeff made the day feel more special. Sunday mornings became our version of date night. Over brunch we’d talk about the sermon and religion and the store, and whatever else came up.

Pretty much unfailingly, following “Go in Peace,” Jeff would sort of hopefully ask, “Wanna go to coffee-hour?” At my request or rather my denial, coffee hour was a no-go. Because that would mean socializing, and that would mean questions. One day, Jeff told me he’d really like to go to coffee hour someday, just for a little bit. I explained I was dreading the day when someone would ask me why I don’t participate. “I mean,” I explained, with a double wrist wave  “I’m sure they’ve already figured it out, but…”

The first time we went to church, Jeff was reluctant to ask if anyone knew our caller. I’m not sure why. When I asked about it, he just said, “Next time.” I didn’t push it, because, well, I wasn’t the reason we were there.

The second time we went, I encouraged him to ask. Jeff said, “Ok.” He slid down the pew to ask a woman he sort-of knew. He remembered her name from years ago, as a friend of Nannee. Surprisingly, she remembered Jeff quite well, and enveloped him in a back-slapping hug.

It was surprising, to me, at the time. You’d think after about the 100th time someone he hadn’t seen in 30-40 years recognized him, remembered him and was happy to see him – that I wouldn’t be astonished.

I never got used to it, certainly never expected it. It happened a lot. Like the time Jeff and I were standing in line to pay at the food auction. When we were just a few people back from cashing out, Jeff left me to pay while he went to get the car. The woman behind me tapped me on the should and asked, “Is that Jeff?” I confirmed and she lit up with a huge smile. “I was his teacher!” As she told me he was such a nice young man, I was picturing a junior high connection.

When Jeff came back in to load up our purchases, he was greeted with a hug. He explained that she was one of his early grade-school teachers.  (3rd grade, maybe?) That surprised me because I’m sure he was a little shorter and had a lesser amount of facial hair at that age. I’d never seen him sans mustache ad beard, and momentarily wondered if I’d recognize him at first glance without them.

The final recognition surprise came a few days after Jeff passed. I received a phone call from the coroner’s office. It was the medical examiner offering personal condolences with the explanation that he had been Jeff’s pediatrician when Jeff was very young. He wanted me to know that he remembered Jeff very well and fondly, too.

Thinking about it now, so many people saw something in Jeff that could easily be dismissed as recognition; but I think what they were really remembering was his never-changing soul.

(And the fact that his laugh was so distinct, someone an aisle over in the grocery store would rush around the corner and exclaim, “I knew it HAD to be YOU!” Happened. More than once.) 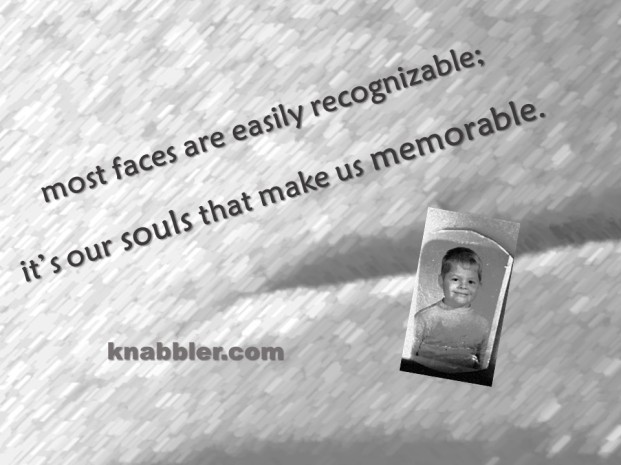 Bonus School Photo Collage (a gift, compiled by my niece): 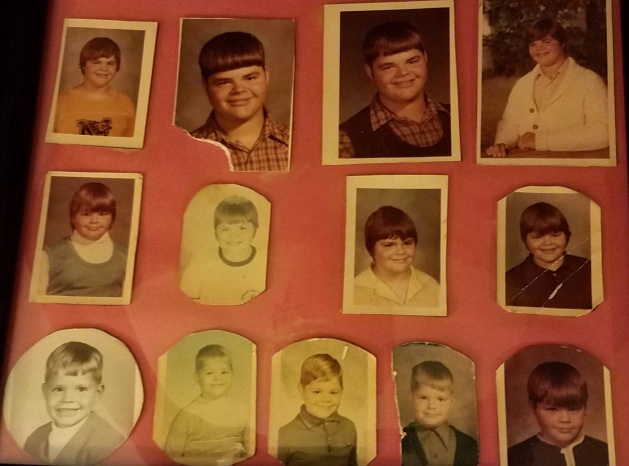