I drove on after the rainbows. By then, there were only two. Kept them in my sight as long as possible; eyes on the sky as two turned into just one, and one eventually misted away, as well.

We might have stopped at the store. It seems like we would have/should have, but I don’t recall that happening.

We might not have, though, because we ended up at The Hoagie Man for take-home cheesesteaks. No fries. We’d been on US 223. Coming from M52 would have been either a double-back or a detoured, long way home.

No idea what time we got home.

No idea what we did after dinner, or before.

No idea what time we went to bed.

We did go to bed, together. Most of the time we did.

Jeff would stay until he’d thought I’d fallen asleep. If he fell asleep with me, he’d likely wake within an hour. At times, I’d be hovering in the twilight. Not quite asleep, yet, I  would hear him get up.

It was an aural thing. I rarely felt his movements, due to the California king-size, split into two twin XL mattresses, on our multi-directional, adjustable electric bed.

We’d purchased the ultra-expensive sleep set-up so that Jeff could sleep with his legs raised. I used the features more than he did, though. Head up, legs up. I enjoyed the massage feature.

That’s wasn’t Jeff’s favorite feature. At first, the vibrating caused heebee jeebee chills and ticklish grunt-giggling. Later, it intensified the neuropathy – the painful kind. He really preferred to lie flat. There was never any adjusting needed when Jeff returned to bed at some later, early morning hour.

No idea if he got up or not after I fell asleep. So, I also have no idea what his sleep cycle was like that night.

This is all kind of murky; and non-impactful, anyway.

It wasn’t unusual from him to remove it, unconsciously, in his sleep.

It wasn’t unusual for me to slip it back on him if I happened to wake up. Since I rarely slept through the night, this was a fairly routine, routine.

“Are you awake?” I asked, knowing it wasn’t likely.

When he didn’t respond, I tried, again. “Jeff?”

He smiled, then sighed, and simply began softly snoring.

He seemed to have settled down from what I imagine was probably a highly hilarious, rather raucous, dream adventure.

I rolled out of bed, fished the mask from the floor and replaced it.

I didn’t have to listen to AC/DC on the way home, either, but, I happily did.

Jeff was asleep before we even made it to the highway, not five minutes away. I was tired, too, so high-energy, head-banging was necessary.

Multiple trips from Nashville to Michigan, and back, were always well stocked. Eating M&M’s one at a time. Munching mini pretzels. Chocolate covered raisins, only on the overnight drives, to avoid messy melt.

Anyway, I had no food stuff for this short trip. I wasn’t hungry anyway, because we’d eaten. But, I did have Jeff’s chosen music that, historically, sounded best played loud. So, that is what I did.

Jeff slept through. He didn’t stir when we slowed. He didn’t notice when exiting where Interstate 94 meets US 223.

There were a few, follow-the-roadway-to-the-right, definite stay-awake curves to navigate on our usual route home. I’ve been looking at a map to try and match the terrain and the place logic.

It might have been near the Slee Highway intersection, or, might have been Gilbert Road – a little further down. I’d have to drive it again to be sure. Maybe, I’ll do that on some future western-to-northern excursion, just to pin point the memory.

If he’d been awake, Jeff would have probably launched into his habit of mimicking NASCAR announcers. “A- rrrround the corner we gooooo!” Jeff (also, sort of often) used the saying to express the notion that I’d cut a street corner a little close, for him.

Fair enough, since I almost amputated his already bleeding leg, that time I pulled into Herrick Hospital. Silly enough, even though he was totally zonked out, the lovingly familiar, would-be comment, floated around in my head.

It popped up out of nowhere on the approach; a double rainbow, though there hadn’t been any rain. At least, none that we drove through. Travelling 55 mph, in the time it took me to second glance, the sight had significantly changed.

I pulled over abruptly, but Jeff didn’t budge. I called out. I shook his shoulder. I yelled, and pushed some more.

Panicked, but not sure why, I resorted to louder stimuli. I blew the car horn three times, in quick succession, then, let one long loud one linger.

That sort of worked.

We had an awesome visit, laughing and listening to Jeff stories; g-rated versions, revised for the one, single-digit aged member of his audience. Covering youth into adulthood, he regaled us, and our impressionable-aged nephew, with hilarious MIS and other misadventures.

Falling asleep in the bathroom for hours, being so unruly his brother and buddies stuffed him into a race tire. How his Mustang got totaled without his help, sitting on the front lawn with a for sale sign, in park.

Jeff recounted having fun jamming his buddies (all the same size and stature) into a tiny Fiesta. Driving to Ohio, for bowling and drinking and a breakfast they called, “a heart attack on a plate.”

He’d said that he’d consume a pound of bacon, a loaf of toast, and a half-dozen eggs. I’m not sure that part wasn’t a bit of an exaggeration. Although, I don’t have any doubt it was a necessarily-big, semi-sobering meal before the return drive home.

“Don’t do that.” Jeff said when he told this particular story. “Don’t drink and drive. We’re lucky we’re all still alive.”

All of these stories, I knew well. I enjoyed them, because he was enjoying himself. It was so much fun to watch others hear them for the first time.

Reminiscence is therapeutic. Sometimes. Sometimes, not. I found myself sadly wishing that everyone could have had a last “leave them laughing” day with Jeff like this one.

Paused, sweet revelation allows me to gift you this tear-drying truth:

This Jeff day was like any other – truly, like every other. Filled with stories and laughter; wisdom and care.

No matter who you are, no matter when that last day was, every single person who ever knew Jeff  had a last Jeff day – exactly like this one. 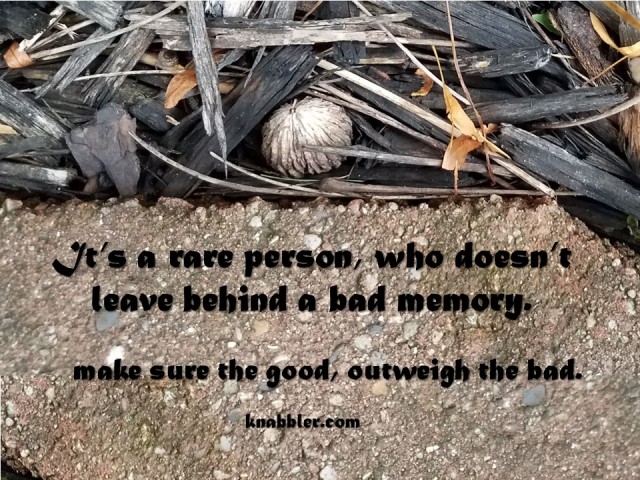