Funeral lessons were drawn from both Testaments.

“I will lift up my eyes to the hills

From whence comes my help?

My help comes from the Lord…”

A Song of Ascent, which continues to be quite the personal message, considering Jeff’s emphatic announcement that my baptism one year before his death was more important to him than our wedding day.

When he said, “Now, I know you’ll be alright,” he meant my place in our Father’s house would be secured.

Not premonitious; just a declaration of peacefulness. Jeff reveled in the calm that my soul was safely held and would be accounted for in heaven. The greatest of gifts.

It’s taken me a few years to appreciate this is the eternal promise that kept me going strong through the first few years.

It’s taken me a few more years to admit I have loosened my grip, lost my hold: effectively muted the joy. Despite that, here I am.  With barely any effort on my part, still going forward.

The thing is, I’m ready to revise, now. Just about everything. I want to begin again. Embrace what needs renewal.

It’s easy to break it into bites that please my palate. That’s only a pound a year!

Except I am now further out away from what should have continued. You see, I wasn’t done. 30 more to go is now 42.

It’s also easy to declare this is what I want. The hard part is action; required.

Then, there’s trying to do too much. Or too much to do, so, not trying.

There’s really only one way through. But, to take that path….

The first thing I remember about October 6, 2006 was entering church and seeing one, lone, beautiful flower wreath.

I’m not sure how Jeff’s October 6, 2001 wedding portrait got there. I assume I brought it, since it had been hanging in our home.

The placement? Prophetically, romantically poetic now. I left Jeff’s photo on the wall until I moved out of our house, 4 years later. But, I took mine down right away. I wasn’t that person, anymore. I still had the name, but I wasn’t a wife.

After we were married, my father inquired, when I was going to change my email address for work? I tried way before he ever asked. Corporately, it wasn’t allowed. To this day, my maiden name remains in the root. But, I’m not that person anymore, either.

Although, it’s painful to admit, I’ve (more recently than not) typed or scrawled my signature on more than a few communications with my prior surname. Last week, I scribbled a return address on an envelope that way, too.

Maybe I should carefully consider this. Maybe it means something.

I’ve been undefined for years; unacknowledged and unreasonably delayed. So, I suppose, it’s time to declare:

After leaving the funeral home, I had to consider the next thing I never considered; funeral attire. Thank goodness my SIL thought to have my brother ask me.

I had plenty of black tops because New York/Music/Rebel black-is-slimming has been my legitimate style. So much so, that when I moved to Nashville, someone finally asked me if I ever wore anything but black. “Oh, yeah,” I’d said. “Navy blue and brown. Sometimes gray!”

Tennessee brought other colors into my wardrobe. Michigan helped with that, as well. There was a problem with my new palates, though. I no longer owned any black pants.

I was never fond of shopping to begin with. If I end up in a store it’s usually because I am looking for a specific item. Or it’s Kohls because they sent me a $10 coupon and a 30% off flyer sticker and a new clearance shirt is never a bad purchase.

But, luckily, that day I was numb and it was Sears, in the mall, because we were driving by it anyway. I wasn’t expecting much luck or fashion at size 24. Amazingly enough, the dowdy plus size section had plenty of black pants options.

I grabbed three pair, tried them on, took the least offensive and was ready to go. That was the day I earned a new moniker from my brother.  “You’re like a Ninja Shopper!” he exclaimed.

That made me laugh. Jeff shared the same observation but not with a title. To Jeff Lowe’s and Walmart were like exhibit changing museums to be indepthly explored, each and every visit. “Slow down,” he’d call from his cart. “We might miss something!”

I’m a fast shopper, unless it’s an antique store or a flea market.  I have almost endless patience for those. But, I’m also usually hoping to take home a salt-chicken. Or two, if there’re two to be found.

I had a fairly dressy black shirt, fairly fitted, point-collared and pinstriped. I thought nothing of it, at the time. Later, when I was willing some of my 20’s weight-loss wardrobe to a friend, I pulled it from the back of the closet and gave that away, too.

Even later, as in late-2019, I was jotting down outline notes, when it occurred to me.

The blouse I wore was black, of course.

The same evening, between other commercials, I addressed the schedule for our up-coming weekend plans.

We were closely booked, which would require a bit of running. Over the past few weeks, we’d canceled a few social outings.

Among those, one was an overdue family visit. One was a much anticipated ‘meet the baby’ date. We’d previously discussed rescheduling the baby outing for Saturday evening or Sunday after church. When I asked Jeff if he’d been able to arrange it, he said he’d been thinking about that.

“Maybe, Saturday at lunch time, would be better,” he hemmed.

“We’re going to Lansing, tomorrow.” I reminded him.

“Well, huh.” Jeff scrunched his lips to the side, and puffed out one cheek. “Maybe, we can reschedule that for when I’m feelin’ better?”

“We’ve already canceled, twice.” I pointed out. “We can’t to cancel, again. Besides, the store is already covered for tomorrow.”

It wasn’t always easy to find someone willing to tend shop by themselves for an entire day. We’d already cancelled our scheduled helper’s shift, once, too.

“Absolutely not!” I popped back. “I’m not going without you.”

I missed my cousin’s wedding in Georgia, because Jeff simply couldn’t make the trip. The advice I received from a non-family member was that he was a big-boy and he could take care of himself for a weekend. I stood my ground that time, too, and refused.

I was terrified enough; always wondering each weekday, if that day would be the day. I can’t even imagine what would have become of me, if I had left Jeff for a weekend, and Jeff had left me forever that weekend.

I badgered my continued opinion. “You can sleep in the car on the way up, and back. It’s what you’d be doing at home, anyway.”

I’m not even sure he was trying to come up with an argument, but in case he was, I enticed and cajoled. “You can pick the music.” I stated, with unarguable finality, “even if you’re gonna sleep through it all.”

“Yeaaahhhh,” he wheezed on purpose, followed by a sinister Mutly laugh.

“Maybe, I’ll bring Kid Rock, too. I can sleep through anythin’ and one of us has gotta stay awake for the drive!”

Cash in hand, we got that settled. It wasn’t a pleasant ride there. We didn’t stop for lunch on the way home, because we were officially a breath away from broke. I spent the rest of the day rebudgeting and being annoyed. It seemed like every time we had scraped just enough to cover a month’s expenses into our savings account, it’d trickle back out again for unexpected car repair or medical expenses.

As self-righteous as I was about our money habits, my life before Jeff wasn’t always so strict. I mostly did what I wanted, saved very little and had no plan for the future. I never really thought forward much, because there wasn’t much to look forward to.

Being with Jeff changed all that. Together, the future was worth thinking about. Comparatively, I ended  up being the spend-thrift in our relationship. Don’t forget, I said, “Yes” a lot. To a lot of really silly things. We collected knick-knacks – Cow Parade figurines, NASCAR die-cast, and chickens. We collected a kitchen full of gadgets – some of which I haven’t used in years; others I’ve never used at all.

Unfortunately, shortly after our crisis, Jeff was asked to stand up in a wedding – a vow renewal actually – in Las Vegas.  My ‘No’ came out quickly. There wasn’t any money left, so there wasn’t anything to think about. But, Jeff continued to think about it. His insistence that he wanted to go should have clued me in that the event was important to him. More than important, actually.

He re-iterated, his Mom could and would be happy to lend us the money for airfare. “How are we going to pay for the other stuff?” I asked him, listing, “… Gas to and from the airport? Parking? Hotel room? Food?” Then, added, “Do you even have dress pants and a suit jacket?” Jeff pulled in his bottom lip and softly nodded his understanding.

The next day, Jeff came back excitedly with another offer to let us borrow the money not covered by the airfare. Again, I refused us that, stead-fastedly stuck on thoughts that borrowing money ruined relationships and knowing we wouldn’t be able to pay either his family or his friend back for a very long time.

There are a few solid times in my life I would like to do over. Sometimes regrets earned from behaving responsibly are far worse than those gained irresponsibly. I wish I’d said to hell with our future finances, and made memories instead. 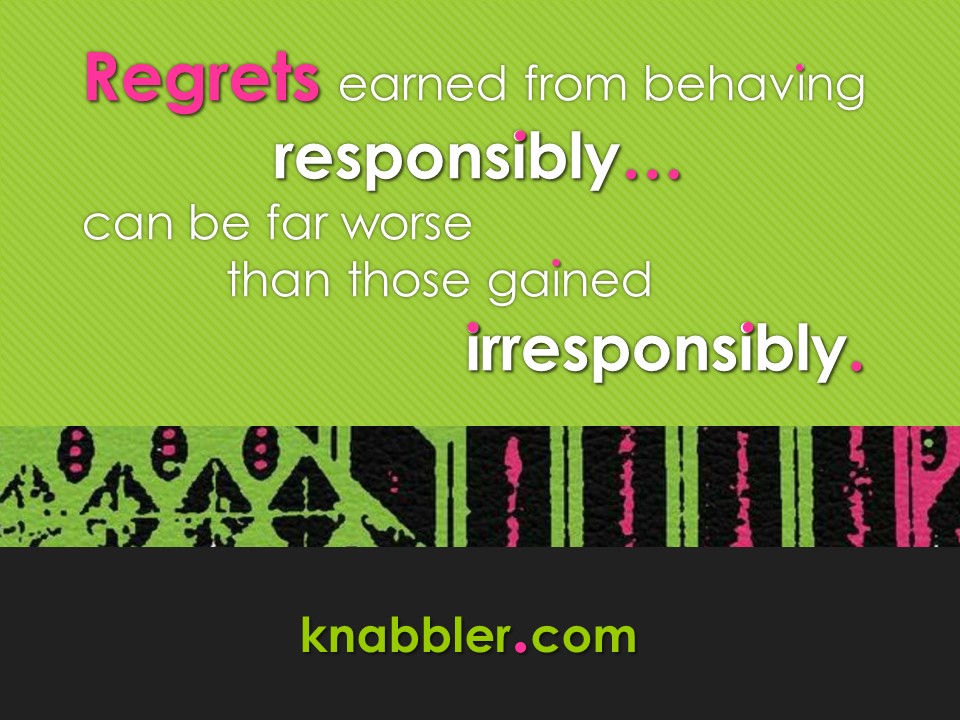 Choice: Make the Right One

Choice: What It Means To