(Ok, ugh. Out of order. Somehow  I managed to skip this post between Around the Corner and Murky. It’s a big important emotional chunk, too. So a restart – to bring us back to that point.)

I blew the car horn three times, in quick succession, then, let one long loud one linger.

That sort of worked.

Jeff didn’t wake with his usual start. He opened his eyes slowly and stared straight ahead.

I considered Jeff’s sleep-talking history and noticed that he didn’t seem to be blinking.

“Hey!” I solidly smacked his arm. “Are you awake?”

He shrugged away from me like I was a loon. “Yeah, I’m awake. A car horn woke me up.”

“Look at what?” Jeff searched the distance. “You used the horn?”

“Why didn’t you just wake me up?” He puzzled.

‘Ugh!” I threw my hands up, pointing again. “Look at the rainbows! There are three of them!”

Jeff squinted and swiveled. “I only see two.”

“There are three!” I directed him to tree-top landmarks; to guide his eye up to the faintest of the triple arches.

Realizing my vision might be clearer because of my colored lenses, I whipped off my sunglasses. “Look through these!” I demanded.

“These are way too small.” Jeff laughed, pinwheeling them.

Overcome with urgency, I shouted “I don’t care! Just put them on, before it’s too late!”

“Ok,” he agreed, but furthered his logical reluctance.

“You know they’re gonna get stretched out and won’t fit your pea-head, anymore.” Said, the man with a head the approximate exaggerated  size of an early-season pumpkin and the scale-confirmed weight of a bowling ball, to the woman who buys her ballcaps and sunglasses in the youth sections of stores.)

I watch Jeff bob his head up and down, peering through them.

By then, the third had almost faded away. An unsettling sadness rolled through my heart into my eyes. Jeff stared at me, shocked. “Why are you crying?”

“I really wanted you to see it,” I whispered, to avoid sobbing. “It’s very… comforting.”

“Comforting?” Jeff repeated, his expression equally confused and concerned. “Why is it comforting?”

I was so truly disappointed for him. In those few moments, it had felt like such an important thing; significant. 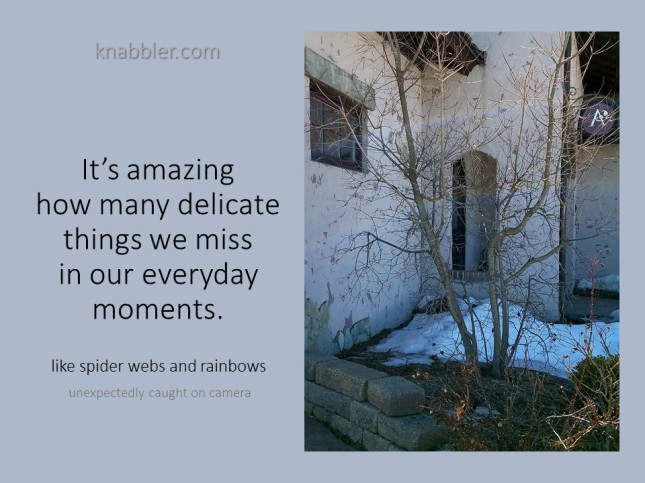 (about this photo, i was sitting at a sunny high top table taking a little rest during a warmish march traverse city wine tour earlier this year. i looked over at this nook, and thought, “i should take a picture.” then, i thought, “why?” then, i thought, “well, those are some interesting angles.” then, i thought, “i’m gonna look like a loon.” but, it kept drawing my attention, so i got up and took a short burst series. back on the bus, i scrolled through some of the day’s photos while waiting for the rest of the riders to board. brought tears to my eyes.  i can’t always see exactly what i’m shooting in sun glares. happens a lot on weekend morning strolls. especially with spider webs and rainbows.)