If you watch enough of them, you’ll absorb some basic knowledge. Most of that will need to be supplemented by online videos, step-by-step instructions or just jumping into the deep end to see how it goes.

Basic knowledge was enough to get me through numerous post Hurricane Katrina rebuilding missions with a construction based Michigan team, and various issues at home alone, later.

If Jeff was still here, he’d be telling humorous stories about some of our least successful attempts at home repair and renovation. We’d always start out thinking, “That looks easy enough.” We’d always end up bickering, and then, laughing at our bickering.

In mid-September, we finished an attempt to ‘easily’ replace the gate at the top of the back deck stairs. We needed one that  our dog, Sadie, wouldn’t be able to plow through, wiggle through or accidentally (or maybe not so accidentally) open. She’d managed to escape a few times, in all those ways.

The installation, actually, went pretty well. We had it done in a little under an hour, and tested our work. That’s when we realized we’d installed it to open the wrong way, by setting it in place upside-down.

“I thought that seemed a little harder than normal,” Jeff commented. Also, more difficult than ‘normal,’ the hardware wasn’t easily removed. Parts of screws broke off or were stripped, nuts fell between the cracks and tumbled down our long flight of stairs.

A lot of banging, two trips to the hardware store and four hours later, we were finished. To celebrate, Jeff suggested we fire up our newly repaired grill and cook-out.

The grill had been another frustrating fiasco. A 15-minute fix turned into two-hours of gentle Jeff cussing while installing a new lighter thingy.

I was inside cutting tomatoes and onions and gathering impromptu picnic supplies, when I heard Jeff shout.

As I ran to the slider, his voice volume was over-excitedly escalating.

Stupefied, I watched him pull and throw chucks of sizzling beef over the 5-foot drop at the back of our deck.

“Jeff!” Alarmingly concerned about his mental state, I slammed the screen door open. Suspecting he was having some sort of serious negative medication reaction, I blurted out, “I’m right here! What are you doing?”

Startled, he turned quickly, giving me a incredulous look, like I was the weirdo in this situation.

His stop-arm reaction time was a bit slower than his body turning time. Set in motion for an airborne release, he lobbed a glob of barely cooked ground in my direction.

I watched it wobble in a somewhat graceful arc, my mental slow-mo calculating: no – that’s not gonna happen.

It happened. Direct hit to my face.

Thanks to you, YouTube, the renovation of one tiny bathroom seemed like a workable solo project. A few simple prep steps, and I’d be on my way to easily saving three hundred dollars off a last-minute quote that came in at half the near $6,000 price of two others. Thanks to you, I could have what I wanted within a 10 x 10 space and within my budget. I got glittery-eyed when I realized I would not have to decide which elements of condo repair to put-off indefinitely. I bought in.

It’s not like I was going in with my eyes closed. Demolition in an unsafe environments, covered in Tyvek suiting, a construction helmet, steel-toe boots, long pants, safety goggles and working in 100 degree temperatures with 100 percent humidity had me envisioning November’s delightful little cool, easing into Michigan winter as a blessing. No sweat required, and even if I happened to break one, it wouldn’t come close to the New Orleans soakings post Katrina.

Thanks to you, YouTube, I gathered enough I-can-do-this confidence to tackle removing 1978 tackiness. Thanks to you, I knew I had to know what was underneath it all. Obviously water-soaked cabinet bottoms, the view from the basement up, cracked tiles and chips in the steel tub forewarned of scary issues that were better known than un. Scenes from The Money Pit and Mouse Hunt had me terrified of stepping into a fall scene.

Fears rallied commitment; commitment rallied knowledge. Knowledge decided YouTube would be the way to go. Numerous DIY tile removal blips demonstrated quick tap-taps scoring and popping off tiles in rapid succession, no special tools required. Any old putty knife and mallet would do. Did I mention with ease? Because, truly, YouTube, your guides were perfect and thorough, promising ease of removement as if life were a PG rated Disney movie, and wearing a ball gown would only aid my efforts.

Less than a dozen tiles in, my YouTube visions crumbled, unlike my walls. There was no firm tapping to score grout. Full blown arm and hammer swings sent miniscule shards flying, caused flint-arcs, smoke puffs and concern. Somewhere around a dozen and half down and three hours later, the putty knife gave up. The handle withdrew, but a major piece of flimsy metal remained lodged behind another stubborn tile, leaving the tool with some wicked curved edges and sharp points I theorized would make the goings easier.

My dear YouTube, the recommended rubber mallet scuffed up the neon turquoise walls a bit when I tried to come in at a closer angle, or when I full-out missed the shortened putty knife. I rarely missed, though. I mean, before the mallet head bonked me in my head and the handle flew past me in trajectory. It was a rather old mallet. I’m estimating its demise at 40 years or so.

After four hours, according to YouTube time, I should have been much further along, and not nearly tool-less. Resolute in non-deterance, YouTube savvy once again, proved not every demonstration employed a rubber mallet, and that the removal of tile is truly a cinch. My ancient ball-peen and I continued pounding brittle, yet indestructible, porcelain. Imagining life without the use of the top two digits holding the smooshed plastic putty knife handle I’d been less-surface-area-with-which-to-hit-the-target miss/whacking out of sheer won’t-quit stubbornness called an end to evening one. 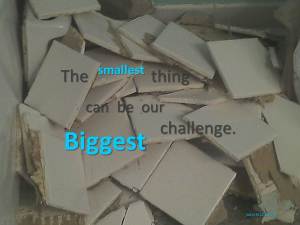 The last time I made a long-term commitment , it turned out to not be so long. Still, the fact that I was prepared to honor that commitment is mighty considering my track record of temporariness.

My un-commitments have been more a more solid bet: jobs, towns, hair color. Not only have I never been bothered by change, I’ve looked forward to it, craved it. The forward-to part hasn’t always panned out positive. When you’re beginning an adventure, and everyone else has already been stuck there for years, your point of view isn’t always appreciated. I’ve found myself an unwelcome short-term outsider who only now can appreciate how my just being there could upset a hierarchical apple-cart, especially one of the preppy-kind. Doesn’t make me feel any better about that year, but I can teeter-totter rationalize forgiveness; some days more than others.

I’ve only recently concluded there are more minutia commitments than grand-scale. We commit every day. Sometimes it’s a job, or a promise to study harder, or play harder, or practice harder. We commit and recommit to exercise, intelligent eating, saving money.

We commit to brushing our teeth in the evening, showering in the morning, and something doesn’t feel right if we don’t. Rote is solid; solidity is commitment. I’ve moved so many times, I don’t despise it. It’s a habit. I might miss that moving feeling in short-time, weigh-in will come later.

This is long-term true. I want to get it right. Once. I don’t want to have to go back and rework. I don’t want to be paralyzed by having to get it exactly right, either. These days define as ups and downs. Some sway longer than others.

“Now” spends a lot of time fighting with “whenever,” which is completely irrelevant because resources are limited. I am uncomfortably staring down a 14-year sprint to retirement savings. “Have-to” is going to win over “want-to,” because I still haven’t ever matched more than one number in the Mega Millions lottery.

I’m spending so much time arguing with myself that I simply don’t have the energy to argue with anyone else.

Some people are liking this new trend; others appear to be loving it.

The Season of Stress Sessions and Shoulder Tension has arrived. As if a late Thanksgiving followed by a quick-moving Christmas and a must-squeeze-the-last-minute-out-of-this-year pre-New Year’s resolution weren’t going to prove challenging enough, just for fun, I’ve thrown a condo, repairs, renovations and moving into the mix.

I’ll be sitting still most of the day a week from now monitoring contractors. Although, I’m still self-arguing that block could be used for bathroom demolishment, I’m also thinking it would be prime  for addressing Thanksgiving and New Address cards. Just so you won’t be disappointed, fair-warning there will be no individually assembled masterpieces this year. I have photographically employed my signature artistic creation, though, so I’ve at least that satisfied a modicum of individuality and a little of my buck-the-norm sensibilities.

By default, my previous no-idea-where-to-begin list from h e double hockey-sticks, has been trashed. I still may grant privy, just to show where my thought wandering comes from.

I may also need to live with the powder blue, sun-bleached, salt-stained, mud-run 35-year-old carpet for a bit in favor of a new electric panel from a company without a class-action lawsuit, re-replace copper or pvc piping replaced with polybutylene, and procure a more efficient furnace than the 1978 needs-so-much-work I should just ease my mind and get a new one which also means re-piping due to previous gas leaks.

There’s an interesting story from The Condo Chronicles. On the second tour, accompanied by and agent and an inspector, I thought I smelled gas. No one else did, but (the story goes) the property had been closed up for a while, it’s not unusual, blah blah blah. An hour and twenty minutes later, we trio-ed the basement. Another thirty-five or so minutes checked out the electric panel, the hack plumbing and for the final assessment, the furnace. There’s this nifty little wand thing that gets waved around the furnace and water heater. It detects gas leaks and sounds an alarm. I really loud alarm, experience has shown. Off with the gas, out with us, utilities notification and that was that.

I’ll sign off this week announcing my intention to spend every free moment moving something, unpacking something, possibly painting something, while hosting contractors. I should also probably announce the already creeping overwhelm. Yup; Stression.

Bob Vila, Where to Begin: http://www.bobvila.com/articles/2232-home-additions-and-renovation-projects-where-to-begin/#.VGKnLfnF-RE