So, I’ll tell you, again. I have no idea who I was writing to.

I’m at a loss really. I’m not sure who I was addressing, but I have thought a lot about who I wasn’t addressing. The ministers covered so much about family and friends, without some of the more questionable parts, but still with enough give to allow for a watery smile or a grimaced chuckle.

I didn’t really decide to add humor to my thoughts. I wasn’t going for a lighten-up-the-atmosphere effect. I just did what I always do. Wrote in my speaking voice. I just wanted to say aloud to as many people as possible, to explain – the importance of him. And the importance of him + me.

I started out steady enough. Halfway through the second sentence, I strangled – I ran out air. I choked emotionally. I blinked the blurriness (that I refused to let fall) into evaporation, gulped and pushed out the rest in a very short-of-breath fashion.

I’m a little hard to understand on regular days. My natural tendency tends to cause confusion. Speaking softly was never a stylistic choice. I will make an effort to overcompensate when alerted to the need.

Much, like the sex-talk Nannee thought she and I had had, but hadn’t – soft speaker vs hard of hearing.

What I said next was similarly interpreted widely off the mark. Terribly misunderstood.

Yes, I had microphone. But, no. Apparently, that didn’t help.

I never fessed up.

Some very important people in my life sought me out that afternoon to say that the words they thought I’d said had made an indelible impact on their hearts. Not in those words and not collectively, but there were 4 of them, plus 1. The first four were one right after another. The fifth was present for all of the others, but reserved comment for a bit.

Following the logic of lyric interpretation – in the old days, at least – when “so fine” was the precursor to “a bangin’ #ut#” – I respect creativity and adore the creators who, very sincerely, decline to explain their work.

What it means to you might be a world away from the aim. The important part is that it gave you something, whether intended or not. The gift is that it moved you, made you more determined, opened your eyes, changed your mind – for the better, for you, whatever.

Sometimes, there’s just no need to correct the notion.

Interpretation is a beautiful thing.

I don’t dislike AC/DC. The manic mouthiness is a little too raucous for early morning deer-watch drives. Absolutely, better suited to starting off a party right, then keeping you awake on a midnight swoop home.

On M-50, just outside of Tecumseh, Jeff nodded off.

Not unexpected, although that usually didn’t happen until Jackson. I made sure he was solidly snoozing, before I flipped the station, and commenced with a self-indulgent, quiet little country music sing-along.

Jeff shifted, sort of snorted, then settled down, again.

An hour and some later, at the end of the exit ramp in Lansing, I clicked the radio off, and nudged him. “Hey, wake-up,” I tickled his chin.

Jeff lifted his head as I turned the corner, checked his bearings, then turned to me and smiled. “I like listening to you sing,” he stated, sincerely.

In 8th grade, it was strongly suggested choir might not be my best elective.

In summer theatre, I was given a silent part in Godspell – you know, a mime.

Admittedly,  I endlessly played each new vinyl record (yep, I’m that old) over and over trying to perfect a lyrical breath or catch an unusual beat-part. At some point, my father would reach a breaking point and yell down the stairs for me to stop singing. I always did. Except, for that one time, I decided to hum along. He told me to stop humming, because that as off-key, too.

I can’t explain Jeff’s enthusiasm for my voice, but that’s the kind of thing love does to a person. He once compared my weird warble to the angelic lilt of Alison Krauss.

I told him he was horribly mistaken, but isn’t it sweet how love can taint your ears? 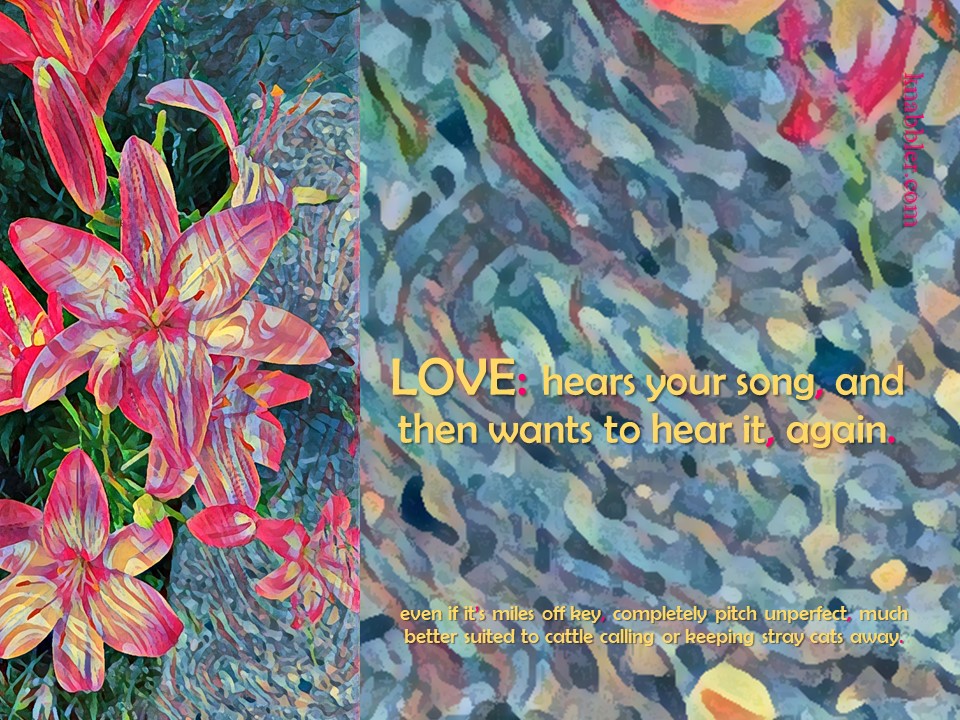