instead of pulling away

one foot in front of the other

that path, owning only

to safely ignore the danger in

just a bit longer, til

paid in full with absolutely no allowance

for aiming for horizons

this sort of thing comes faster

short and short of faith.

It’s been a rather reflectionless week. I’ve been busy planning again. You know; lists and lists of lists and trying hard to accomplish one thing at a time while multitasking.

It goes that way. Starting out organized, calmly reflecting on prep, feeling like I’ve got this thing under control. I should know by now control is relative, and no matter how much far-ahead, careful planning occurs, things will shake themselves up at the last minute.

Dodging curve balls, reaching for the fly’s, bringing along the last thing someone might think they need and being able to pull it off. For some reason, I love that problem-solved feeling.

It isn’t a spotlight crave; and it never has been. It’s simply the joy of facilitation. It’s being able to move things along, assisting, and the satisfaction of help. I’ve long been unable to describe the pleasure of doing; for family or friends, for strangers, or why it feels more natural to give than to receive.

I’m a follower of Joel Osteen’s blogs and posts. Relevant to modern lives, somehow, he answers questions I didn’t know I had, and explains my unexplainable. I’ve been staring at a beautifully presented revelation parked on my desktop for a few months now, remaining confused by the norm-opposing declaration, and wondering if something was lost in translation.

I don’t know where I heard it, or when I learned it, if it was culturally instilled or just an assumption I’ve carried, but I have long subscribed this simple sentiment:

“If you have people in your life who love you, you are blessed.”

I’m not alone in this belief. Humanity spends a great deal of effort on being lovable, judging self-worth on the sharing or withholding of others’. Recent horrific news of revenge methodically carried out by a young man of so few years, fully believing he’d been denied. Tragic and life altering, hard to grasp.

Suddenly, in a single flash of lightening, intense enough to provide direction away from an impending storm,  I understand.

So simple, so true, so enlightening; so not how I have lived.

Although wonderful, it really doesn’t matter if you have people in your life who love you.

It only matters that you have people in your life to love. 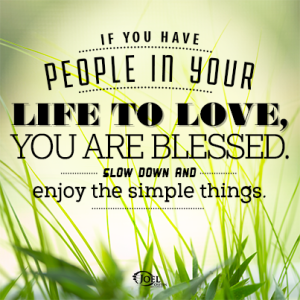 All that goes into lightning: http://science.howstuffworks.com/nature/natural-disasters/lightning.htm

The Key to Efficient Multitasking: One Thing at a Time: http://www.psychologytoday.com/blog/the-fallible-mind/201203/the-key-efficient-multitasking-one-thing-time