It’s been an unbelievable year since the dusty little furball I now call Nala-Mia showed up.

She’s been with HBlu and I during some rough times. She was with us the day that leashed Blu was attacked by an unleashed dog. Interestingly, she showed no fear, waiting and watching. She followed us home, as she had been for a few weeks. I already worried about her at night; was relieved when she’d show up for breakfast. Was overjoyed the first day she let me touch her; the first day she ate from my hand.

We’ve been through a few twists and turns, barely avoiding craters of disaster. When she showed signs of respiratory distress, I feared the worst. I wasn’t able to get her into the carrier the first two times I tried. The third time wasn’t easy or graceful, but, it was successful. I figured she’d be annoyed with me, after that. I didn’t figure she’d be lost for three days in an animal hospital, and end up traumatized and unexamined.

Much like Harley Blu after his encounter, she just wasn’t the same when I got her back. She’s still a bit skittish if I move too fast toward her standing up. If I’m sitting, reclining, sleeping – she’s a love-bug.

Much like Harley Blu, I want her back the way she was before she was damaged. He’s getting there with the help of meds and chiropractic therapy. She’s in love with him, and he seems to be more understanding of that, lately.

I’ll confess, at times, I feel badly for them, both. HB was an only cat-child for almost 9 years. His breed has a preference for being the sole focus of attention. She just doesn’t completely understand the cat world. She has learned to play – as opposed to being terrified of strings and catnip mice. She has learned to interpret the exact moment when Blu has had enough play, and she scurries away.

I know Blu doesn’t like sharing. I know Nala-Mia wanted back out for several months. She’s not pursuing that as much. With hope, I interpret that as she is comfortable rather than defeated. I also know that the pre-yawn snap of her isn’t a real reflection of joy.

It is however, a real reflection of my joy. It is a comfort that she is safe – not hungry, not frozen, and bot likely to get run-over by a car.

I’ve mentioned before, COVID gave me the time to be patient with her. Afforded me hours of adjustment while working from home. So, I was particularly excited to see a call for Pandemic Pet Adoption stories. Our short-story appeared in Michigan Medicine Headlines this week. In fact, that brief (very brief), 223-word, 2 paragraph “caption,” turned into a more concise 165 word account.

So, maybe it may not have had to take as many words to summarize.

The struggle to reduce is still real. I’m still all for details, and, maybe, mildly less distrustful of edits.

My big-picture presentation will always be a gloriously detailed meal. Though, I concede, an edit is admirable as a taste-tempting appetizer.

Happy Anniversary to Us!

Another snippet, someone asked me what they could do for me – maybe straighten up? “The kitchen is a mess,” I conceded, referring to the shambled breakfast I’d abandoned hours ago. “… and I wasn’t expecting company…” I sheepishly admitted.

Suddenly, there were dishwashers and a floor mopper, a dog walker and then the sound of someone vacuuming. And the suggestion that I should leave.

They were about to take Jeff out. The other ambulance that had arrived was solely for the purpose of extra hands to heft. They debated which door to use.

My feisty Oklahoma friend authoritatively spoke up. “She doesn’t need to be here for this.”

There was a question about whether or not I had eaten that day. I hadn’t.

Someone herded me out to a car. I can picture myself in the back seat. There were two women in the front seat. I can’t say for certain, who those could have been. The people I knew best were still bustling around my home.

Another remembered oddity, the car I got into had been backed into our driveway. I think maybe the wife of the neighbor across the street was the driver, that would make sense. She’d have just backed across the street. Perhaps the other person was the slight neighbor acquaintance, one house past my next-door neighbor.

That one seems more solid because I remember taking the family cookies as a thank you. I don’t recall exactly what I was thanking them for. I think she was a bit touched and a bit appalled. “You made us cookies?” she asked. “Oh, my goodness, no! I should be making you cookies! But here you are…”

I know that in those few minutes it had taken me to get into the car, they hadn’t actually begun to take him. I also know I didn’t look back. In a way, we were both leaving home, in a similar time frame. Jeff going one way; me, another.

I was supposed to decide where to eat. I didn’t want to be gone too long, so I said McDonald’s. I didn’t want to eat, really, but went along with the insistence that it was the plan to feed me. I requested a Filet o’Fish sandwich. When asked if I wanted fries, I said, “No. I want to go home.”

“I think we still have to wait a bit…” was the reply.

“Ok,” I said, as I felt myself deflating. Of course, we’d all be going back, but I would never be going home, again. 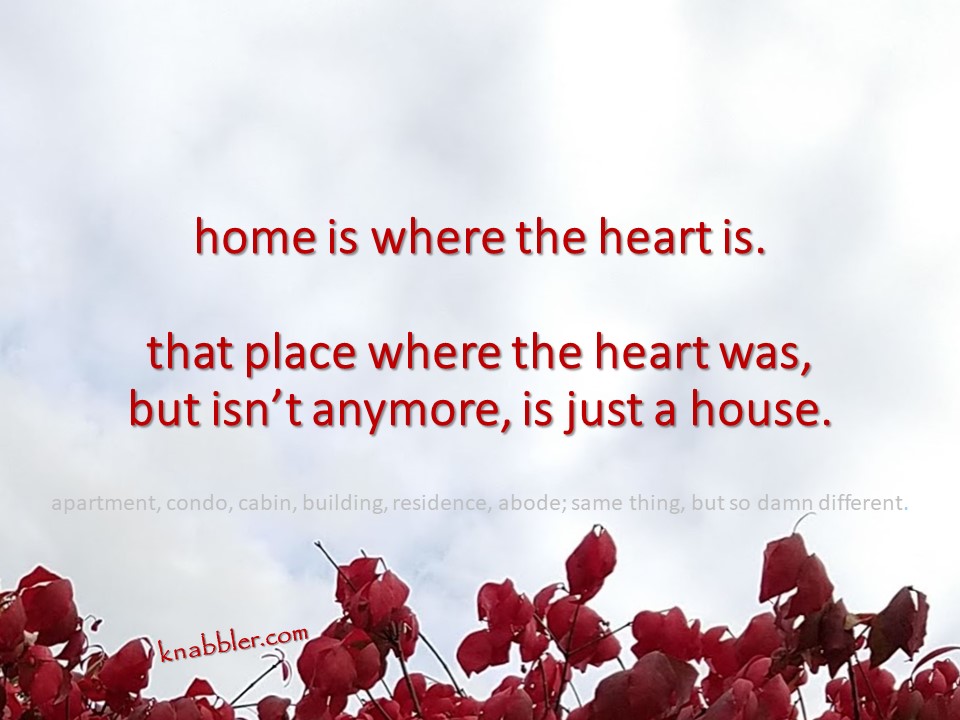 We chose our first dance song because we loved how it represented us.

The first verse was Jeff. The fourth verse was me. Everything in the middle, was us.

The song was a reflection of our daily mutual amazement that we found each other. It was true every day, especially for me.

When we were dating, Jeff was the light at the end of my week.

When we commuted together, Jeff was the light at the end of my workday.

When he was on disability, Jeff was the light at the end of my commute. He was my home, in every sense.

I’ll be honest with you. Every evening, driving (or being driven) home from Ann Arbor to Adrian, the same thought would cross my mind. I terrified myself wondering; will today be the day that I get home and find him dead?

I would pull into the driveway frightened. I would walk into our home frightened, only to be soothed by Jeff’s voice ringing out or reassured by sonic-size snoring.

Coming home, though, meant more to me than that. Spending evenings with Jeff were what I lived for. We didn’t do that much exciting stuff, anymore, but we never lacked for conversation.

Jeff loved the ‘who-done-it’s. Shows like Dr G Medical Examiner, the First 48 and 24. He was loyal to mystery books and tv series, such as Stephen King and House. He loved some reality and ‘reveal’ shows. American Idol, Extreme Makeover, This Old House; but had no taste for Big Brother or The Bachelor. Oh, and cooking shows!

There wasn’t a cooking show Jeff hadn’t seen at least once. Iron Chef, Alton Brown, Paula Deen, and reruns of Two Fat Ladies were a few favorites. Almost fitting into the foodie category, competitive eating and shows about farming, ranked up there, too.

It was impossible not to learn something new every day. It also wasn’t premeditated, meaning that he didn’t set out to find an interesting topic to share. All topics were interesting.

It was fun to listen to Jeff while he was on the phone with my brother, Greg. Their conversation always seemed to turn into a fact-fest in a “one thing leads to another” way, which they both enjoyed. It was also amusing that Jeff could out-talk my brother, as Greg would initiate the conversation’s end with, “Ok, well, it was nice talking to you… I’m gonna go now.”

Jeff was my home and my haven, my teacher and my mentor, my everything for such a short while. For a bit, I’d been envious of those who had him for longer; the ones with longer lists of memories than I. 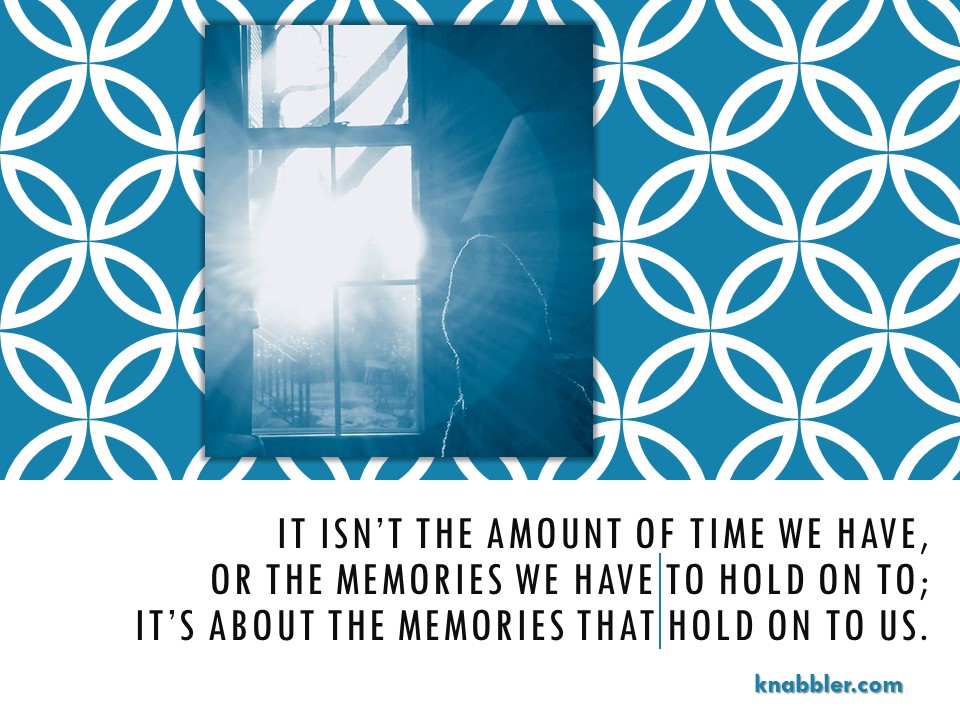 Listen to:  Home To You