I had this whole thing conceptualized as a three-part learning series, which it will be, still.

However, on the front side of holiday shopping, I wanted to share how I layer savings and earn cash back and gift cards and shopper rewards, too.

So, not my best example, but my most recent. Here’s how the FoodSaver purchase worked out for me at Kohl’s:

I started by going to MyPoints and entering Kohl’s from there. 6 points per dollar was the rate on 11/23. It can rise or lower. So, before you shop at any store, open your MyPoints account.

Ibotta Browser Extension 0.5% Cash Back $1.49 (think thirst quencher while you’re shopping) and remember – I earned $193.00 cash back from Ibotta last year! It all adds up. Truly.

Fetch – Unfortunately, only works with online purchases associated with GMail accounts, SO FAR. They’re working on it!

MyPoints: if you are interested in adding MyPoints to your layered savings, please private message me your email address so I may send you an invitation. You can go and sign upon your own, but it’d be nice if you give me a chance to send you the invite. 🙂

Yes, I will earn points or cash back boosts from the above links. But, once you sign up, you can, too!

Create a Junk Email Address. You’ll use this for all of the stores, restaurants, point and cash back programs so they don’t clutter up your real inbox!

When you sign up for any cashback or points program there is usually a bonus. Always check your email and the website for extra deals.

Right now Ibotta is offering 2.5% cash back on Society6 purchases.

I always order samples from each site I list my art on as a quality check. Not only am I super pleased with the pleated, 2-layer, filter-insert features of Society6 masks, I am also super pleased that the Ibotta Browser popped up and offered 2.5% Cash Back ON TOP OF THE SALE PRICE – up to 50% off on a lot of items. Redbubble also offers Ibotta cash back.

Artwork available on masks, pillows, clocks, tables, leggings, travel mugs, and just about any great gift you can think of!

btw – Chewy offers discounts for joining their auto-ship plan. Scheduling is your choice. Auto ships may be canceled at any time, so try it out.

I did a test run, because no one wants to eat bad pie. Especially not on Thanksgiving.

Backtrack just a tiny bit to July of this year, when I discovered I was getting older. It’s not like it’s not an annual event. Yet, for some reason stringing them all together as the years go faster and faster was ne’er fore minded or after minded. Pretty much, not minded at all.

I’ve never attempted to keep two story lines going at once, before. Just know – there’s a new blog just around the corner, I am affectionately calling, “Keto-tonic.”

So, that’s how I ended up uncertain. My first attempt was a little knabble-fied, as usual. I miss-moshed a raved crust with a gloried filling from two different sources. Yes, I knew I was flirting with danger, but the description “Pumpkin Pie Cheesecake” assured me, it would taste just fine.

I also, might have tried to use the ingredients for one filling and the instructions/cooking directions for another. And maybe, I assumed I knew what I was doing when I mixed all the filling ingredients together instead of layering them as one version explained.

You know, it came out ok. Not at first bite, nor the second. By the third tentative taste, I felt I’d come close to a restricted diet dessert I would be willing to share without embarrassment. Just to be certain, I enlisted samplers. They didn’t not eat it, so that was encouraging. They also, didn’t leave any to slide into the garbage bin, which was also uplifting. We all agreed, it could use more spice. They helped me figure out that it’s better to be upfront about the non-traditional crust.

I was still a little uncertain whether this culinary creation would be acceptable for Thanksgiving. After a day of debate, I decided to go ahead and make another one, following the instructions at least a little more closely. The second round began tonight and is still the oven….

Instead of an unfirm cheese-cakey-pumpkin mash-up filling, I layered as I was supposed to originally. 2/3 of the cheese base mixture went straight into the pre-cooked almond-flour crust. The remaining 1/3 combined with the pumpkin carefully set atop. The purple pie plate kinda hindered my determining if I’ve achieved any real separation. As to whether this time I’ve achieved the correct custard consistency… the proof will be in the pudding, as they say.

The thing is, if you’ve got no expectations, it’s really good.

If you explain that the almond crust isn’t flaky and adds its own flavor flare:

If you don’t explain it’s supposed to be precisely layered just in case it comes out marbled:

If you don’t offer it up specifically as Pumpkin Cheesecake Pie: you’ll be better off.

(I’m bringing my full-sugar, un-monkeyed with, homemade cranberry sauce, as back up.

And I’m certainly thankful I’ll be sharing both with family.) 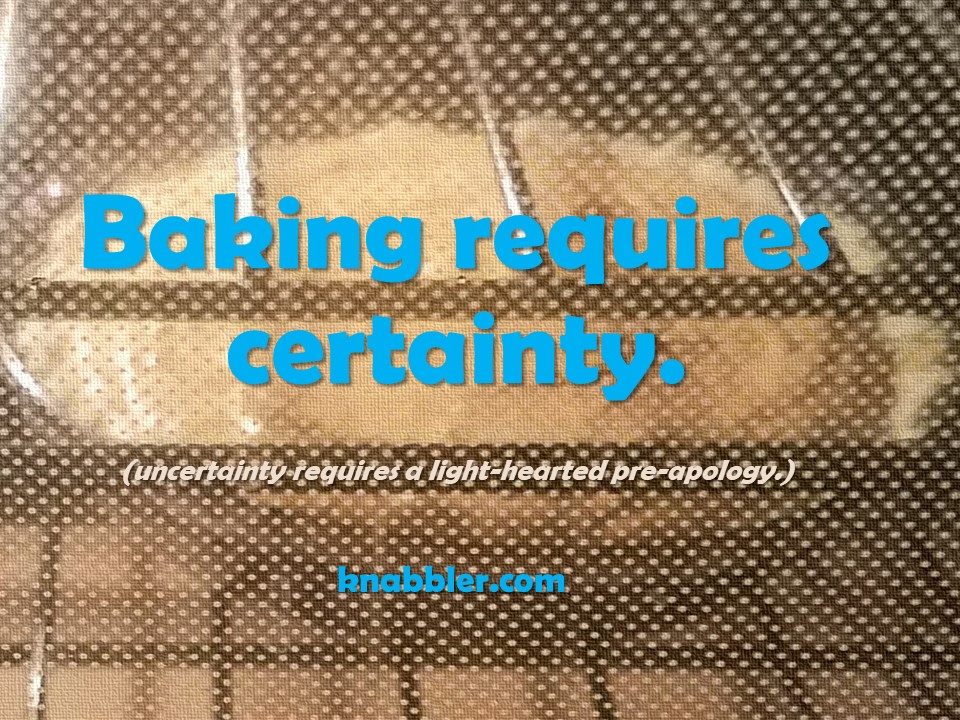 Cranberry Sauce: How I do it

Pumpkin Cheesecake: How I didn’t do it

Keto Pumpkin Cheesecake Filling: How I kinda did it

Almond Flour Crust: How I kinda did it (2)