I hadn’t heard that phrase flung my way in quite a while; a 25 year while.

Never liked the things. Never expected to need another one. Ever.

Do you have any idea how hard it is to take a selfie?

Two hours and fifteen minutes. Uh, huh. I’ve been explaining for a while, that although my pictures reflect near complete baldness, I do in fact actually have hair. Very fine hair, but there’s enough of it to get messed up in the wind so it counts.

One hour and twenty  minutes into the how-hard-can-this-be selfie suffering, I stopped worrying about my hair (or lack thereof) and starting hoping for just one missing an expression of possession. I mean seriously strange eyes.  Dually a victim of circumstance and admitted over-eying, I’m absolutely confident that I have (pictures-taken percentage wise,) surpassed Sir Harley of Perpetual Surprise with my wide-eyed level of shock at absolutely nothing.  I was truly just attempting to avoid the blink.

I must either be an older model of form or an anomaly possessing disproportionate arms. Bottom line: mine are simply not long enough evidenced by missing chins and the removal of that pitifully fine hairline that barely show up, anyway. I trial-and-error landed on a revelation regarding above head poses. Appropriate but still semi-distorted, the elbowed angle determines a corresponding head tilt.

Still, like the last hold-out microwave kernel of corn, more problems popped. How do you keep your elbow from elbowing in or a shoulder crease from announcing obvious buff-less biceps? I suspect some sort of cheat is involved in the process. There has to be a third hand launching the click. Otherwise, everyone would have sprained fingers and tight gripping claw hand residue.

Let me also mention the whole mirror, backwards, go left to go right thing? Yeah, that wasn’t a cake walk, either. The rapid neck-lash routine left me slightly more off balance than usual. At this point I decided to sit for safety, and continued the ego shattering shuttering.

Meanly, cartoon mode isn’t available for selfies. Undeterred, I retry all of the above approaches. All I achieve are arm cramps and a few faintly-fine, low-grade Warhol-ish, but won’t be mistaken for one, images. Due to twist and burn, I’m counting the arm stretches as exercise. It’s also possible that I’ve just invented Photo-Yoga. Momentarily distracted by the possibilities of funky feline portraits, I’m a little bummed to find the cats come out better; especially when annoyed. Raised hackles and alert ears create great contrast and light-play differentiations

The clicking seems to be getting to Miss Freddie, too. She seems a little “I’m plotting something” more than normal. I’m familiar with her squint of slotted eyes and thin lip fang reveal. It turns out I can smile scary, too. In embarrassing desperation, I conjured up laughter as if I was laughing at a joke. My eyes were no longer staring wide. They disappeared entirely. As added insult, my mouth takes on a dreadful twist. I re-file that wonderful idea under woeful fail, and sigh. Ok. Good to know. I’m pretty sure it’s a little late to outgrow that.

Shooting below while looking down ended up producing a completely creepy cautioning I was about to charge and possibly maul with (as of yet) still hidden horns, probably, because I was feeling that way. In a flashbulb moment, I imagined a charge and mall situation where I might possibly convince JC Penney to let me use one of those kid portrait deals.

107 poses later, two pairs of glasses, above the head, below the head, lying down (disaster), over the shoulder, giving up… the giving up one is actually cute, but not at all “Head Shot” material. I think about that and get my grump on.

There are sparse and scattered I-would-have-liked-that poses, except for the exceptional flaws. Oddly, they add artistically fierce fascination. Left ear left out of the shot, micro-movement fuzz effects, irreparable background noise, shiny nose, eyeglass reflection, crooked smiles, mis-angling into distorted chins, chipmunk cheeks or Churchill noses. I nod to the memory of Poppy Selin’s WC Fields-ish nose. His was due to a welter-weight boxing championship. Mine is merely repetitive lack-of-grace breakage.

I’ve chased the late afternoon and early evening light from room to room. I’m either chiseled like a cartoon fiend, or seamless like porcelain. The stark lights are not kind. The soft lights blanks into expression-less-ism. There are a couple of “take the damn picture” glares and I wonder who I’m trying to intimidate the phone or my fingers?

The good news is I don’t need a zoom loop to identify the absolutely nots . Delete, delete, delete.  I pause at one awkward affected 1980 style “looking off into the future” pondering gaze.” Starry and unfocused, if it was the 80’s… it could be a contender.

I should just scan my senior high school picture. It seemed so ridiculous at the time, and even more off-base now. I’m peeking out from behind some tree. It’s got more bark than I do, literally. There’s more of the tree than me. Perhaps a New York photo or the Tennessee head shot which to this day I can’t believe is me. I mean I recognize the clothes, but the young person who I thought was old at 30 looks 20 now to me. Plus, there’s hair. 85% of the people I know now have never seen me with hair; at least, not that much, comparatively.

Eight. I’ve narrowed it down to eight. I think. I’m tempted to take more, but am holding off for tomorrow. Maybe there’ll be better light and a flattering head shot tilt in the Earth’s rotation.

Some of the better one’s have debris in the background. Doesn’t that figure? Photoshop is on my to-own list. I’ve learned I need more than just an ability to “get the red out” of my eerie orbs.  Trying to posit natural eyes isn’t natural. Naturally, I look surprised, skeptical, cross-eyed, lazy-eyed, one-eyed, and tired.

Out of the corner of one of those same self-portrait  wandering eyes, I spy my very reasonable Friday night to-do list that was feasible at 4:15 PM. At 7:48 PM, I haven’t eaten dinner, yet, which might account for some of my shrew-ness. Prior to this marathon of discovery, I prepped cucumbers and zucchini for that “Zucchini Cold Noodle” recipe everyone’s been talking about. Julienne the squash; omitting seeds. Matchstick cucumbers, carrot, peppers, broccoli, radishes, onions, anything really, add red wine vinegar, celery seed, a little sugar, chill and let set and you’ve got it made.

It looks pretty good. I think I’ll plate it. Plop some in a chicken bowl, take a picture, and send it off with a note:

Sorry, no headshot available. Please accept this Bowl Shot as a consolation prize.

Or, maybe I should just take a picture of my smiley face Joe Boxer watch I once used for a staff id photo. Don’t see why it wouldn’t fly now. Wish I’d thought of that, hours ago. 🙂 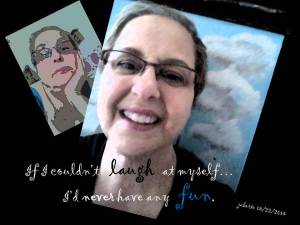 Here is my collage of I honestly thought these would come out better pictures.  All were attempts to be natural; none were staged.

One has to be used for my One Brick Detroit profile. Positive opinions welcome. 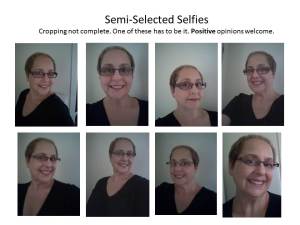 None of these will be used, however, since I described them above…