When Jeff was ready to continue, we set out slow walking. It was obvious to everyone who scooted around us, that there was a problem. It really got him down. We made it into the stands and stood for a while at the bottom looking up. The trudging climbers didn’t seem to bothered by the pace.

“C’mon,” I tugged his hand. “Let’s go…” He was dubious, but shuffled forward.

When the upward surging mass stalled, Jeff held on tightly to the rail. “My legs are shaking,” he told me. “That’s ok!” I replied. “You’ll be stompin’ in your seat shortly.” He gave me a little head shake smile, as the crowd crept along. We plodded on, keeping time with the slow bobbing waves of heads. “One foot in front of the other…” I sang off key. He chuckled.

Not sure how we lucked out, but we had two seats on the end of the row, which meant Jeff could stand up and sit down easily. Eventually, we both caught our breath, and set about the business of setting up in the stands.

Jeff divvied up the headsets, which sadly were really only brought along for ear comfort. They’d previously hooked up to a radio, set to track channels. We’d listen to pit crews, his favorite drivers and even announcer chatter.

He handed me the binoculars and kept the camera, slung around his neck. Jeff surveyed the situation and sighed. “I hope I don’t gotta go….”

I was looking down re-stashing the sunblock we’d just slathered on the back of our necks, when a shadow came over us. I looked up and caught the tail end of a fighter jet just as it soared out of view.  Jeff’s hat came off, smacking me in the face. I reflexively reached up, opening my hand to catch the cap. The sunblock sailed forward and beaned the gentleman in front of me.

In those few seconds of mayhem, the clocked by sunblock fellow turned around. Jeff stepped closer to me, raising his eyebrows and hands in apology. I involuntarily shrieked in surprise as the sonic boom hit. I slapped both hands over my ears as they painfully popped. I’d just experienced my first fly over directly in the path of a fly over. Frozen in place, I stared at Jeff.

He surveyed me quizzically, quickly surmised my shock and threw out his own boom. Jeff’s contagious laugh caught on, as usual. Those around us grinned, chortled, chuckled, and very nicely returned our strewn belongings. 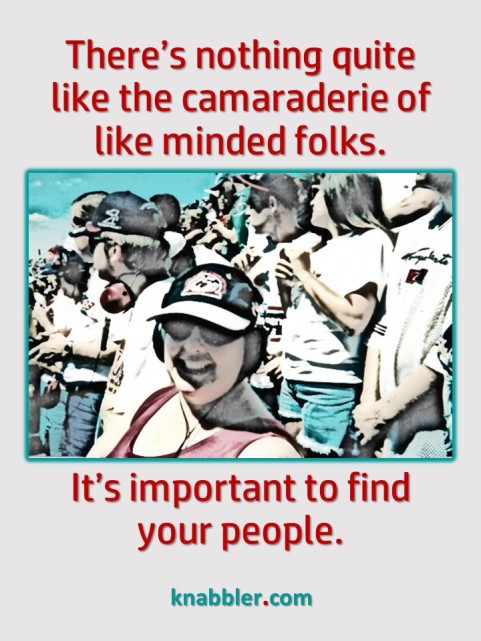