Our off-course wedding took a few more twists and turns.

There was, of course, no time for a pre-wedding huddle, so we forged ahead, not blindly.
We had the plan in place, even if the plan suddenly was no longer clear to the officiant.

Although, it should have been… because we discussed it… and it was in writing.
At least he remembered to bring along the booklet containing our vows and the order of things.

The minister’s greeting went fairly smoothly. Then, because he was – oh, how to say this politely, um, I’ll go with – disoriented, he read past our introductory prayer and began to read our vows as if we were reading them, which we weren’t.

Jeff got his attention by snapping, and in a quiet and unusually stern tone said, “Give. Me. The Book.” He was given the book.

We got through that part, and handed the pages back.

At that point, instead of moving on to the lighting of the candles, the minister began mumbling, “By the authority of the Universal Church and the state laws of Michigan…”

I gave Jeff the “what-happened-to-the-rest-of-it” head-tilt of a puppy who’d just had the remainder of a biscuit yanked away.

Jeff shook his head, took the papers away, shuffled them and handed them back.

Before we even went into the coat closet, Jeff and I made sure the candles and the two lighters were in place. When our mothers arrived at the small table, things came to pause.

The lighters were no longer there. I watched as a game of “do you have a lighter” telephone moved down the groomsmen. A whisper in an ear, a head-shake, a head turn, another whisper in another ear. At the end of the line, there were none in any of their pockets.

This time Jeff looked at me and tilted his head. I turned toward our congregation, asking, “Does anyone have a lighter?” I specifically called to one of my uncles, who did not have one either.

Somehow one found its way to the front, but neither of our nervous mothers could flick up a flame. With help, they got through that part

Jeff and I did our part, each taking one of our mother’s taper candles and jointly lighting our ornate own. So, we got through that part, too.

Later, Jeff learned that upon seeing the Unity candle, the manager thought the most expedient way to handle the impending “fire hazard” situation was to swipe the lighter. Supposedly, he intended to speak with us before we got underway.

That moment when our mothers stopped staring at the uncooperative lighter, looked at each other wide-eyed, leaned their heads together, began to shake with muted laughter and then let go soft giggles is another one of my favorite memories. 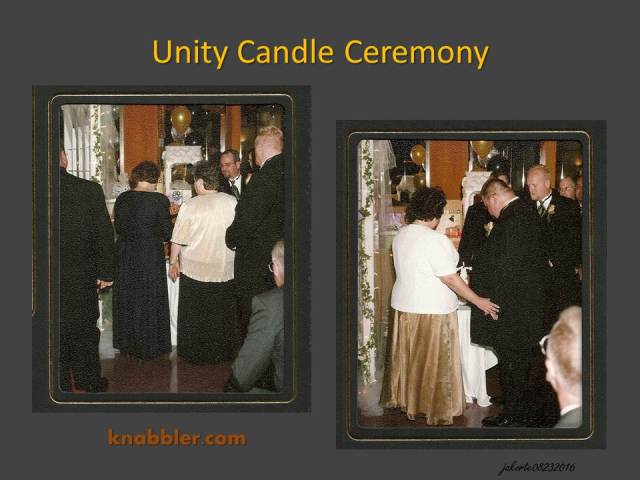