Going back a bit to August, I received another special request from my father.

“Please have the DJ play, “I’ll Be Loving You” by Irving Berlin at or towards the end of the wedding. It is Mom and my “special song.” I WOULD LIKE IT TO BE A SURPRISE, SO PLEASE DON’T SAY ANYTHING TO HER. It would mean a lot to us. Thank you, Dad.”

Of course, his note went into my wedding folder and we bought an Irving Berlin CD, and that was that.

My mother also sent a note. “We are so excited now that we know we are going to make the trip. We still have a lot to do when we get there. I would still like you two to come on the 12th [of August], and I will try out the hotel  kitchen.”

Mom and I went out wedding shoe shopping that day. We left ‘the boys’ at the hotel, and while we were out, she made a special request. “Please, see if you can find Ella Fitzgerald’s version of “Always.” I want to dance to it with your father at your wedding. And, don’t tell him. I want it to be a surprise.” Of course, we bought an Ella Fitzgerald CD, and that was that.

Jeff and I ended up registering at general merchandise retail stores. We really didn’t need much. Maybe new pots and pans, new towels would be nice.  We turned into the kitchen aisle for gadgets, maybe a coffee maker, and to see what was new.

Zapped with an inventory gun – the hand held kind they use in check-out lines when a customer doesn’t want to drag whatever bulky item they have out of their cart. So, yeah, they handed us one of those and said go scan what you’d like to include in your registry.

Up until that point Jeff had control of the magic wand. I became a beeping maniac. Lucky for me, Jeff liked the dishes. A few more appliance type inclusions later, we sort of felt we were done.

We were headed to return the scanner when Jeff had a Jeff-type light-bulb moment.

“Wait!” he said as he turned back and headed for the grocery aisle. “I want to register for one more thing.”

His eyes twinkled with mischief when I asked what he had in mind. “Hamburger!” he exclaimed.

“Um, hamburger?” was my response.

“Yes,” he replied. “We can get a whole freezer full of hamburger if we just put it on our list. I know people would buy it for us.”

I didn’t doubt that we would amass a cow-sized pile of beef.

“Jeff,” I argued. “People can’t wrap up hamburger and bring it to our reception.”

“Um, we won’t know what’s in a gift until we opened it.” I explained. “We’re not planning on opening gifts at our wedding. Maybe not the day after, either. We’d have to have someone take all of our gifts and put them in a freezer just in case!”

In the time our conversation took, we arrived at the grocery section.

Wand-in-hand, Jeff had another obvious Jeff-type light-bulb moment. “Cheez-Its!” he announced, with a silly grin. “I’m going to register for Cheez-its!”

I figured we’d get a lot of Cheez-its at our wedding. It never occurred to me they could show up at my September bridal shower, too. So, I was a bit surprised when I unwrapped a gift to find a box of Cheez-its.

It turned out that would be our only gifted box of Cheez-its. Still, though, Jeff got the biggest kick out of it.

When people ask for wedding advice, I always have two pieces to offer.

The first is to be careful what you ask for, especially if there’s a need for refrigeration.

The second… well, we’ll get to that later… 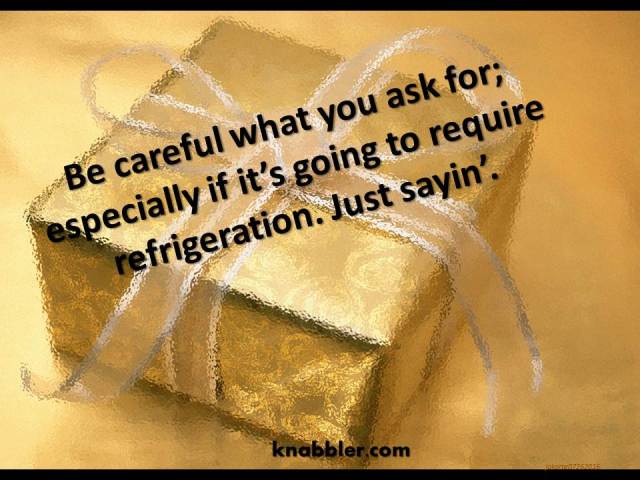 We’re Not the Only Ones:  Registry Quirk