I should mention, Jeff had optimistically come prepared with a one-night overnight bag. Staying another evening required a quick load of laundry.

As he hunkered down on my orange and brown plaid, second-hand couch for a second night, my phone rang, again.

The click just happened, pretty much passing unnoticed because it was so easy and fun.
I didn’t realize it was bells and whistles and lightning striking, until late Sunday afternoon, when Jeff mentioned he probably should be going.

I’ve never been a 100% of the time person. I inherited this trait from my father, who wouldn’t hesitate to stand up at a party in his own home and announce, “I’m going to bed.”  I don’t think he actually ever went to bed, but it absolutely signaled the start of the end of the party. He would, though, actually leave someone else’s house promptly following his announcement that he would. I have to give him props on that, though. Many times, I’ve had enough and quietly slip away. I’m sure it’s rude, but I’m never up for the fuss.

My temperament followed suit. At some point, dates and friends, sorority sisters and school work groups would be told it’s time to go. Wouldn’t matter which of us had to do the going, I’d just hit the “enough” togetherness point. Without saying exactly so, I’d indicate by standing, starting to straighten my abode or gather my things to leave, indicating, “we’re done here” or “I’m done here.”

Jeff was my “here-and-now.” I  hadn’t given much thought that it would end, that he would be leaving, going back to his life and away from mine. bringing up something I’d never imagined; tears. I did not want this to end. I did not want him to go. I was truly scared I might not see him again. It seemed I too easily wrangled a promise that we would see each other next weekend. I wasn’t sure I believed him. I felt ridiculously silly when I wasn’t able to stop the tears.

But, that’s when he kissed me, wiping my wet cheeks with his thumbs, saying we would see other again. And, I believed him.

So much so, that at just 46 hours after our first date had begun, we got a bit… tangled up; um, horizontally.

At almost exactly 48 hours after our first date began, I walked with him to the apartment building door, kissed him, and announced “I miss you already.” He gave me a big belly laugh, a tight pick-me-up hug, and the sweetest kiss, and said he’d be back, for sure.

At a few minutes past 48 hours since our first date began, I knocked on my neighbor’s door. 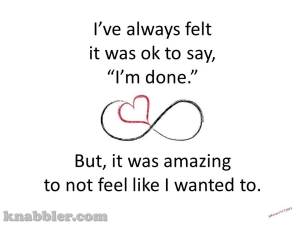