In favor of not looking foolish I often delay good news.

Unfortunately, I reported too soon.

The movers did not come last Thursday.

Because, as hard as it is to believe – I wasn’t ready.

I was on schedule. I was doing just fine. Wall were washed. Floors were next.

Before heading over, I thought, “You know, I should probably eat something.” I responsibly followed through on that tickler. Sometimes, I don’t. Project tunnel-vision often eclipses that.

There’s something remarkably comforting, opening the near empty cupboard door to behold the emergency can of soup. The emergency can security blanket came with the starving-record-company-job in New York City.

Clubbing was required for career advancement; food was not.

For those times when meeting leftovers weren’t available, an event did not feature finger food, or it wasn’t dance-club free buffet with any drink purchase, the choice was usually a cart pretzel, a deli bagel, or home-boiled midnight pasta with butter and black olives. A few times a month, admins and coordinators were treated to an expensed lunch, occasionally allowed to tag along to artist dinners.

For those rare, no-free-food stretches where hunger actually mattered, the cupboard always held a can of tuna or a can of soup. Occasionally, there were both, and I felt rich and secure.

I can account for the emotionabilty, however, in this particular instance, I cannot account for the science. I’ve always been informed and occasionally scorned for disbelieving that canned foods are not subject to absolute spoil dates. Everybody knows you can eat canned foods well past their expiration date with no repercussions. Unless, you’re me, eating a can of recently expired (October 2014) soup. Then, all hell breaks loose. Or doesn’t. Details don’t matter, and are a bit disgusting, but instead of mopping floors on Sunday, I was experiencing Urgent Care, followed by a trip to the Emergency Room.

My emergency can of Chicken Tortilla soup tasted a little metallic, but it’d been a long time since I’d had canned soup, and the soup, after all, had been sitting in a can for a while. It wasn’t tasty; it wasn’t horrible. It just needed to go down so I could go on. It did.

Slurping soup requires sitting. So, I returned a few phone calls, had a few text conversations, and then began to feel very sleepy. Working 8 hours washing walls felt like a good reason to be tired. I actually concluded my last call apologizing, “I cannot keep my eyes open.”

Sluggish persistence stubbornly gathered camp-in gear. A short frigid trek and I’d decided I’d had it. When your body is tired, it’s tired. Mine doesn’t tend to ask – it demands. I shook a quick set-up for a short nap, because I knew I would be up again before the night was over, and I would redo it right, then.

Two hours later, I awoke in pain, in tears and alarmingly in trouble. The trouble with the trouble was that another trouble was making it difficult to get rid of the trouble. It was an extremely unpleasant experience, followed by 48 hours of prescribed bed rest, and no lifting or bending.

If you’ve calculated that out, you know where this is going. If you haven’t, that brings us Wednesday. One day before the movers, three days of carefully coordinated lead-in and lead-out plans went down the toilet. Truly. Thank goodness I know some rational, logical people.

Concentrating on scrambling, what to do first, what to just not do, I missed a major option. Delay.

I also have disproved the common myth that expiration dates on canned goods don’t mean anything, and have proven, once again, that I really should follow my gut. Always. 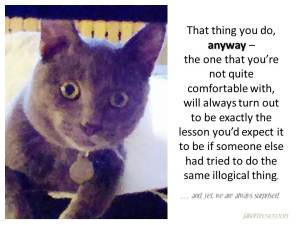