If you have a garden and a library, you have everything you need. – Marcus Tullius Cicero

The near-complete library of hardback editions has been on various bookshelves for almost a decade. Ordered and re-ordered with each move; readying for the reading – someday.

Someday started on a wicked winter evening a few months ago, and ended today, on a sunny Sunday afternoon.

This morning, it became apparent. I remembered correctly: full sun never fills the courtyard. My boggy, spongy, two-yard square could be usefully transformable with pavers, but that won’t help the lack of sunshine. I do love the large trees that filter the just-over-the-horizon-and-rising early morning streams of light. Their leafy widths provide cooling canopies for the large living room windows, but block the tiny outdoor space where I was hoping to spend most of my summer early evenings. The situation also casts doubtful shadows over the veggie garden I was plotting.

Below the tall privacy fence, one sliver of sunlight, six inches wide, sneaks in; lasting a mere two hours. Even if two hours were enough to sustain a garden there would still be a  problem. Critters; making the probability of any plant’s near-sunless survival slimmer. Bird feeders attract birds, of course. Quite a few squirrels are quite happy on our bird-seedy block. That is why I planned to garden on poles centered in my mushy square; to ensure unreachability by squirrels, and hopefully to be ignored by the feeder-fed aviaries.

There are rabbits, too, but since I’ve never seen one that could climb a pole, I haven’t consider them much of a threat. I also haven’t figured out what I’m going to do about all this. But, it does explain how I came to be sitting outside my garage, deeply engaged in a book. Knowingly, at the potential conversational mercy of whoever might come along. Traffic is rare back there, so the odds were seemingly in my favor. I figured the worst that could happen was any one of my three quiet neighbors might come around the corner to find odd little me positioned as if I were setting on a sea-spray lightened, white-washed portico porch within sight and hearing of my truly missed , sandy-edged Atlantic  Ocean.

In all fairness, I brought it up first, sort of.

She wished me a Happy Mother’s Day. Vaguely aware that she is a student, but unsure if she was also a mom, I awkwardly asked if she was able to spend time with her mother today.

I suppose smiling back and silently nodding encouraged conversation, because ours kept moving in a familiarly tricky direction.

“Have you made any calls today?” she asked.

It’s boggling how a second can hold such an incredible amount of mind-scrambling projection, yet appear to be without hesitation. Two truly different seconds; one neighborly, the other a social trapping, the sort I am constantly fearful of.

If I said, “No,” there’d have to be more to it. Announcing my mother and mother-in-law have both died surely wasn’t going to make her day.

If I’d said, “No,” perhaps, considering I could be a mother, she might have posed a second question hoping for a more pleasant answer. “Did anyone call you?” Nothing good could come of that either.

So, I continued to smile, and for a truly untracked number of times, re-made a split-second decision to follow a path that’s becoming uncomfortably easier.

She went on to excitedly share she was getting her bike ready for summer, and soon headed off with her male friend.

I headed back indoors, sat down to finish my book, and promptly welled up. Partly, because the conclusion of The Crossroad was emotionally moving and partly because, it’s never gotten easier.

There’s no easy way to get around explaining who I am without causing distress. Answering normal get-to-know-you questions, all reasonable conversation starters; none designed to harm, is troublesome. With universal politeness and a seemingly standard unwritten checklist, greeters, welcomers, and the inquisitive friendly, begin at the top and move down a one-size line of questioning that fits almost all, but doesn’t fit me.

Honestly, none of my past honest answers were ever meant to cause distress. It amazes me that I haven’t figured out or settled on one short, pat, encompassing explanation. It isn’t a newly assigned definition. It’s been this way for a while, but nothing is settled, and sometimes, I pseudo-pleasantly, purposely redirect into a lie.

Genuinely, I never said I called my mother; I just agreed that I called someone. I never said where I called; I just imparted I have lived in Connecticut. Even so, the guilt and worry that come along with trying to spare, isn’t pleasant. It crosses my mind to fess-up upon our next chance meeting, or maybe even seek her out so that future conversations won’t find me dancing around some half-truths, deeper in.

Much like the complex and struggling Rachel Yoder, I find that perhaps I am not being fair to others, or myself. Perhaps straight-up is the way to go. Perhaps mainstreaming difficult conversations will impact others positively, after they’ve had a while to digest.

The Crossroad ends with apt consideration – accurate for where I’m striving to be:

“After years of enduring darkness and pain in a cocoon of my own making, it’s ever so gut to gnaw out of the protective covering – through the scars – and open my new wings. Some days, they’re a bit fragile, even doddering, but one thing I know for sure and for certain, the Lord has daily granted me a “speckle of pluck.” Not a full measure of confidence just yet, but I’m trusting for that as I take one flitter of my new wings, a day at a time.”

Quote for the week:

If you have a garden and a library, you have everything you need. 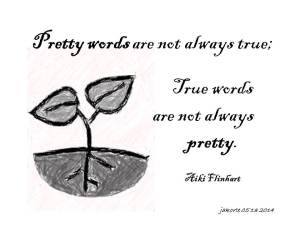